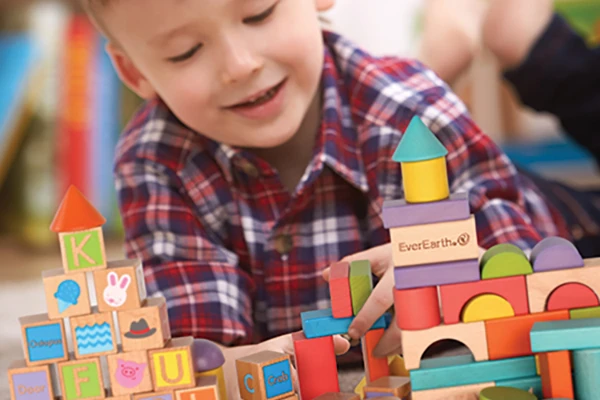 Research that explores the effect of constructive play has found that assembling blocks comes with many benefits:

Most of the studies on constructive play have found that assembling games help develop kids’ spatial abilities. For instance, one study analysed how block-building helped develop spatial-reasoning skills kindergarten children. The kids were divided into three groups. Block-building activities were proposed to two groups and the third group acted as a control group. The researchers found that block building helped children develop wider spatial skills. Spacial intelligence is the ability or mental skill to visualise objects from different angles and facets.

Children who were most interested in constructing block structures were able to come up with more creative productions and were also able to produce more varied creations when playing with the blocks.

Encouraging children to engage in constructive play can help them develop their problem solving skills.

A study examined the development of problem solving among children under age three. The study found that children who engaged in block play developed greater problem-solving skills. For example, these children were better able to pick up a spoon in different orientations, retrieve objects with rakes, or retrieve objects placed inside tubes. In other words, children who engaged in constructive play were better able to come up with solutions to solve problems.

Constructive play has been found to be effective in calming anxious kids and in helping kids develop social skills. In a study of 60 autistic children participated in block therapy and were compared to 57 autistic children who received a comparable non-block therapy. The study was conducted over a three year period. The researchers found that although both groups showed significant improvement after the therapy, the children who had participated in block therapy showed much greater improvement.

Better problem-solving performance was observed among kids who engaged in constructive play.

The best thing about good construction toys is that the possibilities of what kids can create are limitless!